She lay on her back and let the little one crawl all over her as the older sister played with toys nearby.
She held her mommy fingers high above her baby's body and moved them down little by little until her daughter could reach them and they continued this game for several minutes.
When her little one got too close to her sister's toys, momma quietly and gently re-directed the scampering 4-month-old so that her sister could be left in peace. But then the sister decided that climbing to the tippy top of a nearby tree would be much better entertainment . . . for an adolescent gorilla.
We stood on the other side of the glass so incredibly close to the intimate exchange taking place between a mother and her daughters that I almost felt like I was intruding. A zoo volunteer stood near us with a clip board, taking tedious notes on the pair and marvelling in the fact that momma and baby were allowing us visual access to their daily routine, they usually hang out in the lush grasses on a sunny day, far out of sight from the humans . . .
I would too, momma. I would too.
My daughter stood there, holding her baby, unable to pry herself away from the sight. I stood above her, one hand cautiously holding onto her shoulder as the bigger kids pushed and noisily flocked to the glass as their chaperone yelled, "Shhhhhh . . . you must be quiet in here!"
When they cleared out, we were again at that peaceful place. Just us and the gorilla girls. Mothers and daughters. Sisters. Hands, feet, mouths, eyes, noses . . . so similar.
A woman stepped up next to me, she could have been my grandmother.
"It's just so amazing," I said, "they're just like us."
She looked at me and smiled one of those wise woman smiles that are not often present in my life.
"Rather," she said, "we are just like them." 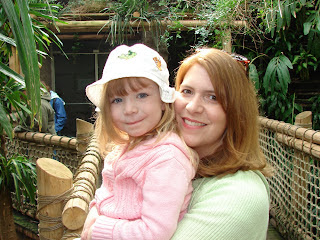 Oh you have a deep thinker on your hands! Don't let her throw that kind of thinking your way when she tries to wiggle her way out of eating her veggies :)

Wow. What a great gift. I'm glad you actually spend TIME at the zoo.. so many people rush from one area to the next. Can't wait for my break, so I can come too!

ps..Do you remember, back in Kodiak, when your brother wouldn't take a nap? You would perch in your bed, "reading" while he crawled all over me.......

This post was incredible! I absolutely, positively have always loved any and all types of monkey/gorilla. They are beautiful creatures. It's so great that you got to witness that special bond between the mother and baby!

What a great post Carrie! Your picture is beautiful too!

I miss my daughter being little!

so sweet, love the picture!

what a great moment!

The zoo is magical that way. I love it!

I love those moments.

Your zoo looks astonishingly similar to our Franklin Park Zoo over here.

What a great post! And what a wonderful picture of you and your daughter!

Carrie that was BEAUTIFUL. And you guys are so incredibly cute!!!

Now, not to sounds whiny, but how come every time we went to the Woodland Zoo last year( we had an annual pass), we always got the bulemic gorilla?

You know the one that would vomit his shredded carrots into goo and then slurp it back in chunks. then vomit it. Then slurp, with finger-licking. Rinse, lather, repeat.

Yep, FIFTEEN times this gorilla did this sitting right in front of the glass.

Either it was his way of saying screw you all for putting me in this enclosure or he was really screwed up behavior-ly for being in his enclosure. It made me soo sad.

Someone said he was a teenager. Ahh! Leave it to a teenager to do something that gross. He was probably just liking the attention and the gags the adults made everytime he did it.

Oh I love this post Carrie. You took me right there with you.

i never thought of it that way. so true though...love the pics

Adorable picture of you and your daughter.