The other day, driving home from somewhere, Wyatt gazed as we passed the large, brick building with all the stained glass windows and asked, "Mom, why don't we go to church?"

Now, I am driving. I have been waiting for this question for lord knows (pardon the pun) how many years, but I do not want to have a philosophical, spiritual, worldly conversation with my 9-year-old while I am behind the wheel.

So, I bide my time with, "let's talk about it when we get home, okay?" and move on down the road.

When I began explaining my beliefs, or disbeliefs, it became glaringly obvious that I didn't know what the heck I was talking about. I could see his mind begin to wander as I rambled on.

"I want you to be able to make up your own mind about which religion you choose to believe, or not. I want you to know that I support whatever you believe, even if I may not agree with it. There are so many, many choices out there and it is good to explore all of them until you find one that fits, or not - and that's okay too."

It is so hard, when religion follows us everywhere.

It's not that I am opposed to organized religion, it just doesn't fit me, us. There are some traditions that I take hold of, like saying prayers at bedtime, and uphold, like not taking "the lord's" name in vain (even if I don't necessarily believe in "the lord" - it's offensive and I don't want my kids to offend another's beliefs). I find comfort in chruch when I visit for funerals, weddings and holidays.

But this comfort, I believe, comes from the coming together of the people, the fellowship, who are there listening to a positive message, not from "the lord."

I am fine not "going to church" to validate my beliefs.

But, as a parent, it is so hard to explain these things. And even though I think I've exposed my children to beliefs of all types, I realize that I have a lot more work to do.

Most of all, I want to give them the choice, as I had, to make up their own minds without sullying them with my intentions. I want them to know that it is okay to believe what one wants, after all, this is America, right?

I pray (non-Christians are allowed to pray) that these freedoms aren't taken away from them.

So, after our little conversation, rather, my rambling diatribe, Wyatt turns to me and says, "Mom, if the girl I marry goes to church, I'll go with her."

We've a long road ahead of us. We do. 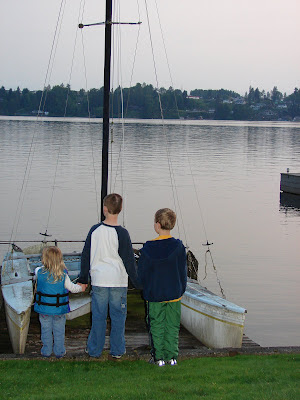 oh babe, you know i've been wrestling with this too. all we can do is lead by example (and that doesn't just mean words, right!)

Just last weekend, my boys asked me how come they weren't baptized when their cousins are (and one is going to be next weekend). Religion is a biggie here...how do you make decisions for your children when they are young, and still allow them the freedom to choose when they are older? Are we not, in effect, making the choice for them? And is that right?

I struggle with this all the time. I share your beliefs (beautifully listed, by the way), but I do not want to close the door for my children to believe something else. But I fear that I am.

What a sweet picture to accompany such a sweet remark by your son. He will make a terrific husband.

It's hard - this religion thing. I grew up in a very Baptist home and went to church for 18 years every time the door was open. I take my own children to church - but not as regularly as I was taken as a child. Alexis is the one that wakes the household on Sunday mornings - she comes to the side of my bed and says, "Wake up Mama - it's time to go to church." She is my moral compass these days!

Have a good weekend Carrie - I the picture of your sweet children.

We're half ass... religious schooling, hit or miss on Church. Well, mostly miss on Church... I just want them to grow up understanding that, in the end, faith is behaving the right way... the moral way, and all religions (and people!) pretty much agree on those basic codes.

I smiled reading your post. My two girls have always chosen car drives to surprise me with topics that I should've been warned were coming. These are not 70MPH topics :)

That kid does think big thoughts, doesn't he?

those are tough questions. i haven't been asked that as of yet from my rug rats.

I really appreciate your post & the comments of your friends in the blogosphere. It was so difficult for us to know how much to expose you & your brother to.. on one hand, we had our own experiences as children, with Sunday school, church & all, but then, we had both left that behind for a time. You may recall we took all of us to a local church and then made the leap to the log cabin Unitarian fellowship in Alaska - where we felt at home and not unspiritual at all. I really don't think you need worry about the kids. You know, they will find their own way. They just need to know that its okay to explore those paths & think for themselves. period.

Thanks Mom! Obviously having a mom like you has given me the strength I need to support whatever my kids decide to believe. Just like you support me! It's always helpful when our beliefs are on the same page though! :)

I grew up going to church Sunday mornings & evenings AND Wednesday nights.

I've been a few times here and there since leaving home, but ...

For me, the thought of having to rush around on Sunday mornings -- well, ugh. We already do that five days a week. I want time at home with my family.

I guess I've always thought we'll start going when the kids get older. But I don't know. I have some serious hangups about churches.

I'm gonna be the same way.

That Wyatt is a pretty insightful kid. Please pat yourself on the back!

My two eldest children have both surprised me with church questions--also in the car.

My husband and I both had strong religious upbringing as children--he Catholic and me Mormon. Now we have varying views which are far from our childhood religions. We haven't figured it out, but are very interested in going to a Unitarian church on the Eastside since they seem accepting of all religious/spiritual ideas. We honestly haven't found the time yet to check it out.

In the meantime, my daughter's fast friends with a bunch of Mormon girls and want to fit in. She keeps begging to go to their church. Ack! I hated being forced to attend church as I child, now i feel guilty not taking my kids.

Oh sweetie, I'm so glad you blogged about this. We are going to have this face this same thing in a few years....as we will raise our daughter the same way you have with your children regarding religion. These conversations are never easy are they...

omg what a sweetie for saying that though about a future gf.

I think it takes a strong person to let their children choose. It's so much easier to point to something larger than ourselves to answer questions and give explanations. As difficult as it was for me to find my own path spiritually, I know it is important for my children to find their own path, too. I can't imagine taking that journey away from them. :)

God is such a big part of my life, he has been with me through alot. I do go to church and I do have a religion (Baptist). But what I have is more than a religion. I have a relationship with the one true God. I do agree with how you see the world, and whatever path your children choose it is their choice. Actually thats really alot of what my relationship with God has taught me. I just know from experience that God is very real, and I don't know what I would do without the support of my friends and family at Church. Kids can ask us some difficult questions sometimes. They get you thinking. :)

I just wanted to say that the photo of the 3 of them is amazingly clever! The not-so-subtle cross formed by the pole and whatever the cross beam is called...very well done.

I mentioned at book group that I had tried being a "church person," and it just wasn't me. So now I have a book about religion and an invitation to bible study!

Can I just say that girls with big brothers are the best? Tough and sweet--it's a killer combination!

I struggle with these thoughts all the time. My husband is atheist, and I'm just sort of floating along, not really sure about anything. I believe this, if more people thought that this life was it, perhaps they would be nicer to each other and make the most of each day. Perhaps suicide bombers would no longer exist...just thinking, always thinking...